The Ontario government moved forward Thursday with initiatives to rein in the housing market in and around its largest city, announcing 16 new measures including a 15 per cent tax on foreign buyers and expanded rent control rules.

The rent control measures, which apply province-wide, were immediately met with threats from developers to cancel projects in the Greater Toronto Area, an outcome that could ultimately lead to an even tighter market for rental accommodation.

“Our message is this is going to have a devastating effect on purpose-built rental supply,” said Jim Murphy, president of The Federation of Rental Housing Providers of Ontario. “This is coming at a time when we have renewed interest in building rental (properties). We had a 50 per cent increase (in construction) last year.”

One of the changes from the province deals with buildings constructed after 1991, which were previously not covered by rent control rules, allowing landlords to demand any rent they wanted once a lease was up. Anecdotal reports suggested landlords were doubling rents in some cases.

Premier Kathleen Wynne said the Ontario’s Fair Housing Plan had been in the works for weeks after months of consultation.

“The skyrocketing cost of renting or buying in Ontario and the Greater Golden Horseshoe in particular is the unwanted consequence of a strong economy with a promising future,” Wynne said at a press conference at which speculators and landlords were also blamed for rising housing prices and gouging renters. “When young people can’t afford their own apartment or can’t even imagine owning their own home, we know we have a problem.”

The Toronto Real Estate Board said this month that March prices across the region were up 33 per cent from a year ago while condo research firm Urbanation Inc. said condominium rents rose 8.3 per cent in the first quarter from a year ago.

Toronto developer Brad Lamb said the province didn’t do anything to boost supply in the province and vowed to cancel the rental projects that were already in his pipeline.

“Everything is stopping on the dime. I had nine apartment buildings in my pipeline,” said Lamb, describing projects in Toronto’s central core, its suburbs and Hamilton. I can tell you as of this announcement I will not do any of them.”

Wynne was undeterred by arguments from developers. Sources indicate that up until a day ago the province was set to a agree to a deal that would have allowed landlords with post-1991 buildings to pass on annual increases of inflation and up to 1.5 per cent.

“We have all heard the stories of rent gouging going on in today’s market. It’s wrong. And it is not at all fair. The argument that developers need to be able to increase rent by as much as 100 per cent or they won’t keep building rental units, just does not hold water,” the premier said.

The province is trying to appease developers with breaks on property taxes, development fees and promising a better process for cooperation to identify barriers to projects.

“Acknowledging the disincentive that rent controls can cause, Ontario is providing a carrot,” said Craig Alexander, chief economist with the Conference Board of Canada. “The rent controls will stem the rapid rise in rental prices occurring in the market. Only time will tell whether it hampers future rental supply.” 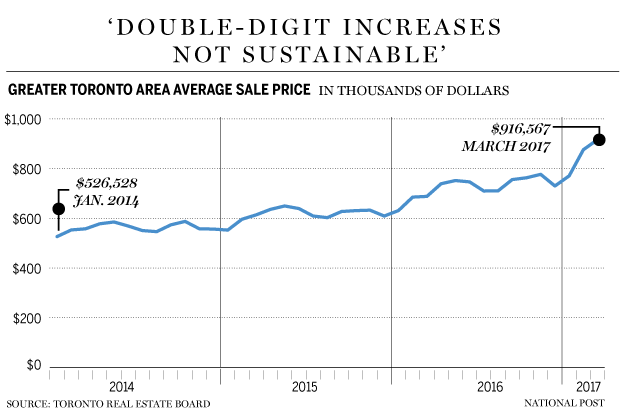 The non-resident speculation tax of 15 per cent which only applies in the Greater Golden Horseshoe was generally welcomed by economists as a small step to control spiralling prices with a general belief that overseas buyers are not as prevalent in Toronto as Vancouver.

“Ontario is a welcoming place,” said Wynne. “The non-resident speculation tax has nothing to do with new Canadians and people who want to make Ontario their home. With the tax, we are targeting people who aren’t looking for a place to raise a family, they are only looking for a quick profit.”

Queen’s Park also agreed to a request from Toronto Mayor John Tory to crack down on vacant homes, a perceived problem in the city. Toronto, along with other municipalities, will soon have the power to impose a tax on vacant homes.

“(The measure) will encourage owners to sell or rent their unoccupied units,” said Charles Sousa, the provincial finance minister.

Municipalities will also be allowed to provide a higher tax on service land approved for development, something the government thinks will help spur housing development of vacant lots.

Ontario will also crack down on assignment clauses, the practice which allows a buyer who hasn’t closed a purchase to pass on the right to buy a property. “There are speculators who enter into agreements to purchase property with no intention of buying them or living them, crowding out families who want to buy their own home,” said Sousa.

He believes those “scalpers” are avoiding tax “and should pay their fair share” so the government will now be demanding full disclosure, if a property has been transferred through an assignment clause.

The government wants to make sure the land transfer tax is being paid and plans on working with the Canada Revenue Agency to pass on information it gets from its crackdown on assignment clauses.

Queen’s Park also has plans to review the real estate industry, checking on practices such as double ending where a realtor represents the buyers and the seller. “We’ve heard about fake bidding so we want to modernize the rules,” said Sousa.