The Bank of Canada has decided to keep its benchmark interest rate where it is, citing a possible slowdown of the economy.

While the economy gained steam through the last half of 2016, it predicts a slowdown ahead, which is why it has decided to keep its benchmark interest rate where it is for now.

"Following a very weak first half of 2016, growth in the third quarter rebounded strongly, but more moderate growth is anticipated in the fourth quarter," said the bank, which is led by governor Stephen Poloz. 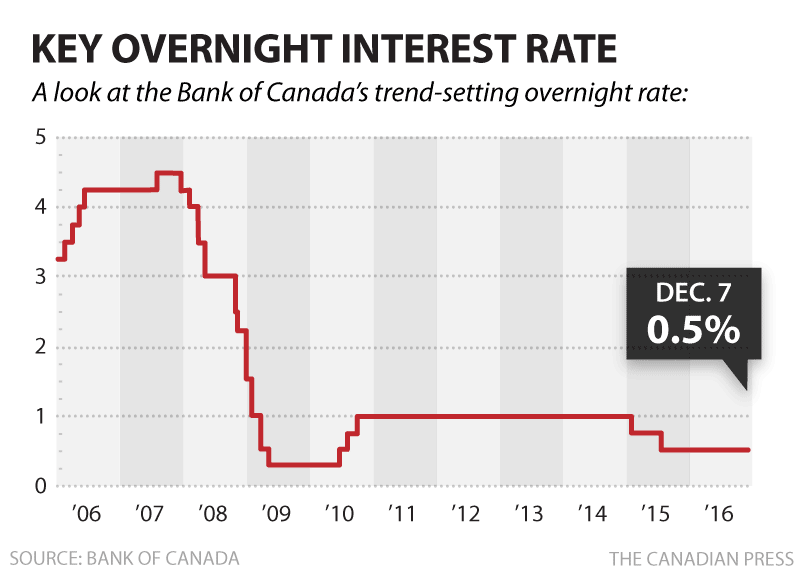 The bank's rate, known as the target for the overnight rate, is currently at 0.5 per cent.

"Following the election in the United States, there has been a rapid backup in global bond yields, partly reflecting market anticipation of fiscal expansion in a U.S. economy that is near full capacity," the bank said. "Canadian yields have risen significantly in this context."

That's the bank's way of saying that bond yields have crept higher since Trump was elected, so the bank sees some merit in staying on the sidelines until some of that uncertainty settles down.

"No doubt, the back-up in bond yields is unwelcome by the Bank," Bank of Montreal economist Doug Porter said of the decision, "but we judge that overall financial conditions in Canada are broadly unchanged since the October meeting."

"Barring some massive shock, the Bank appears to be very comfortable staying on the sidelines for some time yet."